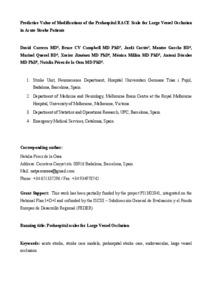 Prehospital clinical scales to identify patients with acute stroke with a large vessel occlusion and direct them to an endovascular-capable stroke center are needed. We evaluated whether simplification of the Rapid Arterial oCclusion Evaluation (RACE) scale, a 5-item scale previously validated in the field, could maintain its high performance to identify patients with large vessel occlusion. Methods: Using the original prospective validation cohort of the RACE scale, 7 simpler versions of the RACE scale were designed and retrospectively recalculated for each patient. National Institutes of Health Stroke Scale score and proximal large vessel occlusion were evaluated in hospital. Receiver operating characteristic analysis was performed to test performance of the simplified versions to identify large vessel occlusion in patients with suspected stroke. For each version, the threshold with sensitivity closest to the original scale (85%) was used, and the variation in specificity and correct classification were assessed. Results: The study included 341 patients with suspected stroke; 20% had large vessel occlusion. The 7 simpler versions of the RACE scale had slightly lower area under the curve for detecting large vessel occlusion because of lower specificity at the chosen sensitivity level. Correct classification rate decreased 9% if facial palsy was simplified or if eye or gaze deviation was removed, and decreased 4.5% if the aphasia or agnosia cortical sign was removed. Conclusions: We recommend the original RACE scale for prehospital assessment of patients with suspected stroke for its ease of use and its high performance to predict the presence of a large vessel occlusion. The use of simplified versions would reduce its predictive value.
CitationCarrera, D., Campbell, BCV, Cortes, J., Gorchs, M., Querol, M., Jiménez, X., Millán, M., Dávalos, A., Pérez de la Ossa, N. Predictive value of modifications of the prehospital rapid arterial occlusion evaluation scale for large vessel occlusion in patients with acute stroke. "Journal of Stroke & Cerebrovascular Diseases", Gener 2017, vol. 26, núm. 1, p. 74-77.
URIhttp://hdl.handle.net/2117/102420
DOI10.1016/j.jstrokecerebrovasdis.2016.08.032
ISSN1052-3057
Publisher versionhttp://www.strokejournal.org/article/S1052-3057(16)30304-4/abstract