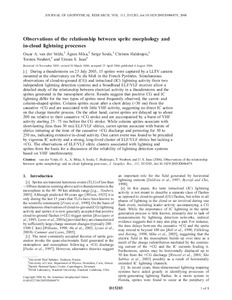 Except where otherwise noted, content on this work is licensed under a Creative Commons license : Attribution-NonCommercial-NoDerivs 3.0 Spain
Abstract
[1] During a thunderstorm on 23 July 2003, 15 sprites were captured by a LLTV camera mounted at the observatory on Pic du Midi in the French Pyrénées. Simultaneous observations of cloud-to-ground (CG) and intracloud (IC) lightning activity from two independent lightning detection systems and a broadband ELF/VLF receiver allow a detailed study of the relationship between electrical activity in a thunderstorm and the sprites generated in the mesosphere above. Results suggest that positive CG and IC lightning differ for the two types of sprites most frequently observed, the carrot- and column-shaped sprites. Column sprites occur after a short delay (<30 ms) from the causative +CG and are associated with little VHF activity, suggesting no direct IC action on the charge transfer process. On the other hand, carrot sprites are delayed up to about 200 ms relative to their causative +CG stroke and are accompanied by a burst of VHF activity starting 25–75 ms before the CG stroke. While column sprites associate with short-lasting (less than 30 ms) ELF/VLF sferics, carrot sprites associate with bursts of sferics initiating at the time of the causative +CG discharge and persisting for 50 to 250 ms, indicating extensive in-cloud activity. One carrot event was found to be preceded by vigorous IC activity and a strong, long-lived cluster of ELF/VLF sferics but lacking a +CG. The observations of ELF/VLF sferic clusters associated with lightning and sprites form the basis for a discussion of the reliability of lightning detection systems based on VHF interferometry.
Location
1: 65120 Sers, França
CitationVan Der Velde, O., Mika, Á., Soula, S., Haldoupis, C., Neubert, T., Inan, U. S. Observations of the relationship between sprite morphology and in-cloud lightning processes. "Journal of geophysical research: atmospheres", 4 Agost 2006, vol. 111, núm. D15203, p. 1-8.
URIhttp://hdl.handle.net/2117/102400
DOI10.1029/2005JD006879
ISSN2169-8996
Publisher versionhttp://onlinelibrary.wiley.com/doi/10.1029/2005JD006879/full
Collections
Share: