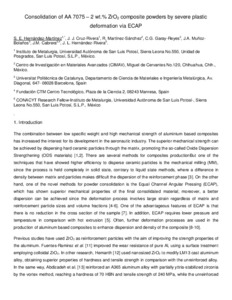 Hernandez Rivera, J. L.
Document typeArticle
Rights accessOpen Access
Abstract
The powders of the AA 7075-ZrO2 were mixed by mechanical milling, but it was found that the system presents a few disadvantages when processed by conventional sintering and hot extrusion, since intermetallic phases between ZrO2 particles and alloying elements were formed. Equal channel angular pressing (ECAP) processing was proposed as an alternative method to consolidate the composite where there is no intermetallic formation. The analysis of the ECAP process showed that the intermediate temperature (220 °C) produced a higher consolidation level than conventional sintering and hot extrusion (400 and 500 °C, respectively). This fact was supported by relative density analysis. In the case of the sintered and hot-extruded sample, the relative density exhibited a value of 0.95, while ECAP sample showed a value of 0.98. Hardness values show that microstructural refinement obtained during mechanical milling was preserved during ECAP processing even when it was carried out at 220 °C.
CitationHernadez-Martinez, S., Cruz-Rivera, J. J., Martinez-Sanchez, R., Garay , C., Muñoz, J., Cabrera, J., Hernandez, J. Consolidation of AA7075-2wt%ZrO2 composite powders by severe plastic deformation via ECAP. "Acta Metallurgica Sinica-English Letters", Octubre 2016, vol. 29, núm. 10, p. 895-901.
URIhttp://hdl.handle.net/2117/102387
DOI10.1007/s40195-016-0477-z
ISSN1006-7191
Publisher versionhttp://link.springer.com/article/10.1007%2Fs40195-016-0477-z
Collections
Share: