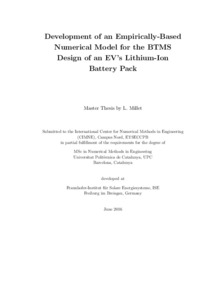 In this thesis, the electrochemical and thermal behavior of an LFP lithium-ion pouch battery is modeled, within a finite elements method framework, in order to study the fast charge procedure that is sought in most of the battery applications and to assess the design process of the BTMS. The simulation approach couples a 2D empirical electrochemical cell model, based on a simple equivalent circuit model approach, with a 3D thermal model that solves for the thermal activity and temperature distribution among the battery volume. The electrical performance of the battery under study is characterized experimentally at different ambient temperatures. The open-circuit voltage curve of the battery is approximated from both long relaxation time and continuous low current measurements, and the associated battery impedance is determined from the operating voltage measurements under different continuous current charge and discharge rates. The thermal performance is experimentally measured by testing the battery within an isothermal calorimeter, and the obtained data is employed to corroborate the validity of the implemented model. The results from the developed electrochemical-thermal model present good agreement with the overall battery thermal measurements data. The developed model is used, in the second part of the thesis, to study the behavior and the design of the battery thermal management system. On one hand, local battery cooling is analyzed, concluding that local cooling near the battery current tabs can enhance the battery life expectancy. On the other hand, a novel battery pack assembly design for automobile application is presented and modeled, including simple lumped models for heat pipe and thermoelectric elements, and an optimization methodology is set to find the optimal geometry for such design.
SubjectsElectrochemistry, Lithium, Electroquímica, Liti
URIhttp://hdl.handle.net/2117/102336