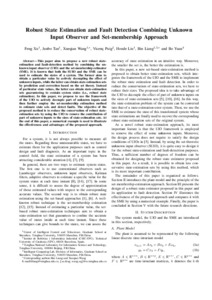 Liu, Houde
Liang, Bin
Yuan, Bo
Document typeConference report
PublisherIEEE Press
Rights accessOpen Access
Abstract
This paper aims to propose a new robust state-estimation and fault-detection method by combining the unknown input observer (UIO) and the set-membership estimator (SME). It is known that both the SUIO and the SME can be used to estimate the states of a system. The former aims to obtain a particular value by actively decoupling the effect of unknown inputs, while the latter can obtain state-estimation sets by prediction and correction based on the set theory. Instead of particular state values, the latter can obtain state-estimation sets guaranteeing to contain system states (i.e., robust state estimation). In this paper, we propose to use the framework of the UIO to actively decouple part of unknown inputs and then further employ the set-membership estimation method to estimate state sets and detect faults. The objective of the proposed method is to reduce the conservatism of robust state-estimation sets by using the UIO to remove the contribution of part of unknown inputs to the sizes of state-estimation sets. At the end of this paper, a numerical example is used to illustrate the effectiveness and advantages of the proposed approach.
Description
© 2016 IEEE. Personal use of this material is permitted. Permission from IEEE must be obtained for all other uses, in any current or future media, including reprinting/republishing this material for advertising or promotional purposes, creating new collective works, for resale or redistribution to servers or lists, or reuse of any copyrighted component of this work in other works
CitationXu, F., Tan, J., Wang, X., Puig, V., Liu, H., Liang, B., Yuan, B. Robust state estimation and fault detection combining unknown input observer and set-membership approach. A: International Conference on Control and Fault-Tolerant Systems. "SYSTOL 2016 - 3rd Conference on Control and Fault-Tolerant Systems, Barcelona, Spain, Sept. 7-9, 2016, proceedings book". Barcelona: IEEE Press, 2016, p. 67-72.
URIhttp://hdl.handle.net/2117/102285
DOI10.1109/SYSTOL.2016.7739730
ISBN978-1-5090-0658-8
Publisher versionhttp://ieeexplore.ieee.org/document/7739730/
Collections
Share: