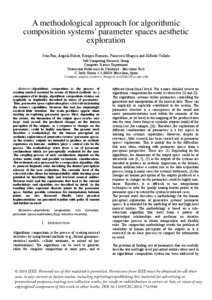 Document typeConference lecture
PublisherInstitute of Electrical and Electronics Engineers (IEEE)
Rights accessOpen Access
Abstract
Algorithmic composition is the process of creating musical material by means of formal methods. As a consequence of its design, algorithmic composition systems are (explicitly or implicitly) described in terms of parameters. Thus, parameter space exploration plays a key role in learning the system's capabilities. However, in the computer music field, this task has received little attention. This is due in part, because the produced changes on the human perception of the outputs, as a response to changes on the parameters, could be highly nonlinear, therefore models with strongly predictable outputs are needed. The present work describes a methodology for the human perceptual (or aesthetic) exploration of generative systems' parameter spaces. As the systems' outputs are intended to produce an aesthetic experience on humans, audition plays a central role in the process. The methodology starts from a set of parameter combinations which are perceptually evaluated by the user. The sampling process of such combinations depends on the system under study and possible on heuristic considerations. The evaluated set is processed by a compaction algorithm able to generate linguistic rules describing the distinct perceptions (classes) of the user evaluation. The semantic level of the extracted rules allows for interpretability, while showing great potential in describing high and low-level musical entities. As the resulting rules represent discrete points in the parameter space, further possible extensions for interpolation between points are also discussed. Finally, some practical implementations and paths for further research are presented.
CitationPaz-Ortiz, I., Nebot, M., Romero, E., Múgica, F., Vellido, A. A methodological approach for algorithmic composition systems' parameter spaces aesthetic exploration. A: IEEE Congress on Evolutionary Computation. "2016 IEEE Congress on Evolutionary Computation (CEC): 24-29 July 2016, Vancouver, Canada". Vancouver: Institute of Electrical and Electronics Engineers (IEEE), 2017, p. 1317-1323.
URIhttp://hdl.handle.net/2117/102221
DOI10.1109/CEC.2016.7743940
ISBN978-1-5090-0622-9
Publisher versionhttp://ieeexplore.ieee.org/document/7743940/
Collections
Share: