An efficient algorithm to find the best state sequence in HSMM 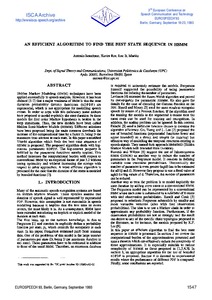 Except where otherwise noted, content on this work is licensed under a Creative Commons license : Attribution-NonCommercial-NoDerivs 3.0 Spain
Abstract
Hidden Markov Modeling (HMM) techniques have been applied successfully to speech analysis. However, it has been claimed [1-7] that a major weakness of HMM is that the state duration probability density functions (SDPDF) are exponential, which is not appropriate for modelling speech events. In order to cope with this deficiency some authors have proposed to model explicitly the state duration. In these models the first order Markov hypothesis is broken in the loop transitions. Thus, the new models have been called Hidden Semi-Markov Models (HSMM). Different solutions have been proposed being the main common drawback the increase of the computational time by a factor D, being D the maximum time allowed in each state. In this paper a modified Viterbi algorithm which finds the best state sequence of HSMM is proposed. The proposed algorithm deals with log-convex parametric SDPDF. The log-convex property is fulfilled by the parametric functions usually applied. This method increases the computational burden with respect to conventional HMM by an empirical factor of just 3.2 without losing optimality and without increasing the storage with respect to other approaches. A more efficient algorithm is presented for the case that the duration of the states is modeled by bounded functions.
CitationBonafonte, A., Ros, X., Mariño, J. An efficient algorithm to find the best state sequence in HSMM. A: European Conference on Speech Communication and Technology. "EUROSPEECH 1993: 3rd European Conference on Speech Communication and Technology: Berlin, Germany: September 22-25, 1993". Berlin: 1993.
URIhttp://hdl.handle.net/2117/102214
Collections
Share: