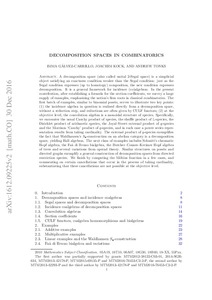 A decomposition space (also called unital 2-Segal space) is a simplicial object satisfying an exactness condition weaker than the Segal condition: just as the Segal condition expresses (up to homotopy) composition, the new condition expresses decomposition. It is a general framework for incidence (co)algebras. In the present contribution, after establishing a formula for the section coefficients, we survey a large supply of examples, emphasising the notion's firm roots in classical combinatorics. The first batch of examples, similar to binomial posets, serves to illustrate two key points: (1) the incidence algebra in question is realised directly from a decomposition space, without a reduction step, and reductions are often given by CULF functors; (2) at the objective level, the convolution algebra is a monoidal structure of species. Specifically, we encounter the usual Cauchy product of species, the shuffle product of L-species, the Dirichlet product of arithmetic species, the Joyal-Street external product of q-species and the Morrison `Cauchy' product of q-species, and in each case a power series representation results from taking cardinality. The external product of q-species exemplifies the fact that Waldhausen's S-construction on an abelian category is a decomposition space, yielding Hall algebras. The next class of examples includes Schmitt's chromatic Hopf algebra, the Fa\`a di Bruno bialgebra, the Butcher-Connes-Kreimer Hopf algebra of trees and several variations from operad theory. Similar structures on posets and directed graphs exemplify a general construction of decomposition spaces from directed restriction species. We finish by computing the M\
CitationGalvez, M., Kock, J., Tonks, A. "Decomposition spaces in combinatorics". 2016.
URIhttp://hdl.handle.net/2117/102202
URL other repositoryhttps://arxiv.org/abs/1612.09225