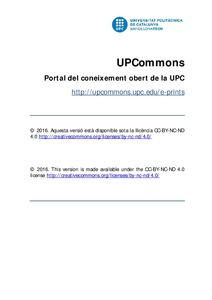 Except where otherwise noted, content on this work is licensed under a Creative Commons license : Attribution-NonCommercial-NoDerivs 3.0 Spain
Abstract
The effect of three different organically modified layered silicate clays (Nanomer I.30E, Cloisite 30B and Nanofil SE 3000) on the exfoliation process and on the thermal properties and nanostructure of cured trifunctional epoxy resin based nanocomposites was studied. Optical microscopy showed that the best and poorest qualities of clay distribution in the epoxy matrix were obtained with Nanofil SE 3000 and Nanomer I.30E, respectively. However, the isothermal differential scanning calorimetry scans show that, of the three systems, it is only the Nanomer clay that promotes intra-gallery reaction due to homopolymerisation, appearing as an initial rapid peak prior to the cross-linking reaction. This rapid intra-gallery reaction is not present in the curing curve for the Cloisite and Nanofil systems. This fact implies that the fully cured nanostructure of the Cloisite and Nanofil system is poorly exfoliated, which is confirmed by small angle X-ray scattering which shows a scattering peak for these systems at around 2.53°, corresponding to about 3.5 nm d-spacing.
Description
© 2016. This version is made available under the CC-BY-NC-ND 4.0 license http://creativecommons.org/licenses/by-nc-nd/4.0/
CitationShiravand, F., Hutchinson, J.M., Calventus, Y. A novel comparative study of different layered silicate clay types on exfoliation process and final nanostructure of trifunctional epoxy nanocomposites. "Polymer testing", Desembre 2016, vol. 56, p. 148-155.
URIhttp://hdl.handle.net/2117/102195
DOI10.1016/j.polymertesting.2016.10.007
ISSN0142-9418
Publisher versionhttp://www.sciencedirect.com/science/article/pii/S0142941816307838
Collections
Share: