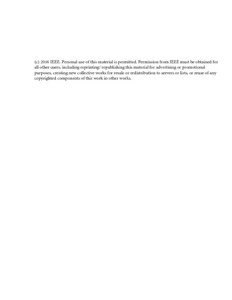 Tashakor, Ghazal
Jukan, Admela
Ren, Guang-Jie
Document typeArticle
Rights accessOpen Access
Abstract
The recent advances in cloud services technology are fueling a plethora of information technology innovation, including networking, storage, and computing. Today, various flavors have evolved of IoT, cloud computing, and so-called fog computing, a concept referring to capabilities of edge devices and users' clients to compute, store, and exchange data among each other and with the cloud. Although the rapid pace of this evolution was not easily foreseeable, today each piece of it facilitates and enables the deployment of what we commonly refer to as a smart scenario, including smart cities, smart transportation, and smart homes. As most current cloud, fog, and network services run simultaneously in each scenario, we observe that we are at the dawn of what may be the next big step in the cloud computing and networking evolution, whereby services might be executed at the network edge, both in parallel and in a coordinated fashion, as well as supported by the unstoppable technology evolution. As edge devices become richer in functionality and smarter, embedding capacities such as storage or processing, as well as new functionalities, such as decision making, data collection, forwarding, and sharing, a real need is emerging for coordinated management of fog-to-cloud (F2C) computing systems. This article introduces a layered F2C architecture, its benefits and strengths, as well as the arising open and research challenges, making the case for the real need for their coordinated management. Our architecture, the illustrative use case presented, and a comparative performance analysis, albeit conceptual, all clearly show the way forward toward a new IoT scenario with a set of existing and unforeseen services provided on highly distributed and dynamic compute, storage, and networking resources, bringing together heterogeneous and commodity edge devices, emerging fogs, as well as conventional clouds.
CitationMasip, X., Marin, E., Tashakor, G., Jukan, A., Ren, G. Foggy clouds and cloudy fogs: a real need for coordinated management of fog-to-cloud computing systems. "IEEE Wireless communications", 1 Octubre 2016, vol. 23, núm. 5, p. 120-128.
URIhttp://hdl.handle.net/2117/102183
DOI10.1109/MWC.2016.7721750
ISSN1536-1284
Publisher versionhttp://ieeexplore.ieee.org/document/7721750/
Collections
Share: