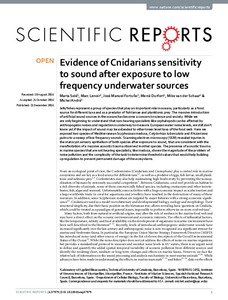 Except where otherwise noted, content on this work is licensed under a Creative Commons license : Attribution-NonCommercial-NoDerivs 3.0 Spain
ProjectAQUO - Achieve QUieter Oceans by shipping noise footprint reduction (EC-FP7-314227)
Abstract
Jellyfishes represent a group of species that play an important role in oceans, particularly as a food source for different taxa and as a predator of fish larvae and planktonic prey. The massive introduction of artificial sound sources in the oceans has become a concern to science and society. While we are only beginning to understand that non-hearing specialists like cephalopods can be affected by anthropogenic noises and regulation is underway to measure European water noise levels, we still don’t know yet if the impact of sound may be extended to other lower level taxa of the food web. Here we exposed two species of Mediterranean Scyphozoan medusa, Cotylorhiza tuberculata and Rhizostoma pulmo to a sweep of low frequency sounds. Scanning electron microscopy (SEM) revealed injuries in the statocyst sensory epithelium of both species after exposure to sound, that are consistent with the manifestation of a massive acoustic trauma observed in other species. The presence of acoustic trauma in marine species that are not hearing specialists, like medusa, shows the magnitude of the problem of noise pollution and the complexity of the task to determine threshold values that would help building up regulation to prevent permanent damage of the ecosystems.
CitationSole, M., Lenoir, M., Fortuño, J.M., Durfort, M., Van Der Schaar, M., Andre, M. Evidence of Cnidarians sensitivity to sound after exposure to low frequency underwater sources. "Scientific reports", 21 Desembre 2016, vol. 6, núm. 37979.
URIhttp://hdl.handle.net/2117/102145
DOI10.1038/srep37979
ISSN2045-2322
Publisher versionhttp://www.nature.com/articles/srep37979
Collections
Share: