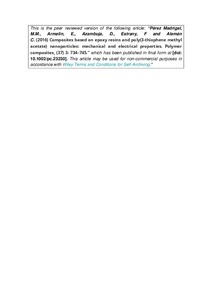 Document typeArticle
Rights accessOpen Access
Abstract
Conducting polymer nanocomposites (CPnC) have been prepared by loading different concentrations of poly(3-thiophene methyl acetate) (P3TMA) nanoparticles to an epoxy network. Therefore, the typical limitations of CPs applicability, i.e., reduced solubility and difficult processability, have been overcome. The influence of different factors (i.e., curing temperature, solvent used to disperse nanoparticles, and concentration of P3TMA) on the CPnC properties has been evaluated. The major requirement to obtain homogeneously distributed materials has been found to be the P3TMA-solvent compatibility. Xylene, which is typically used in epoxy resins, has been practically eliminated to avoid the formation of aggregates and has been replaced by tetrahydrofuran. Although properties like chemical structure and doping level as well as morphology and P3TMA nanoparticle distribution into the epoxy matrix have been examined for CPnC samples, particular attention has been paid to evaluate their mechanical and electrical properties. The Young's modulus and tensile strength values increase upon the addition of a small concentration of P3TMA, independently of the curing temperature, with the exception of 25 wt% P3TMA composition that exceeds the percolation limit for this material. The electrical DC conductivity determined for samples with 12 and 25 wt% P3TMA ranged from 6.0 x10(-7) to 8.2x 10(-7) S/cm. Therefore, CPnC films exhibited a semiconductor behavior with conductivity values at least three to four orders of magnitude higher compared to that of the pure insulating epoxy (10(-11) to 10(-13) S/cm). POLYM. COMPOS., 37:734-745, 2016. (c) 2014 Society of Plastics Engineers
CitationPérez-Madrigal, Maria M., Armelin, E., Azambuja, D., Estrany, F., Aleman, C. Composites based on epoxy resins and poly(3-thiophene methyl acetate) nanoparticles: mechanical and electrical properties. "Polymer composites", 18 Setembre 2014, vol. 37, núm. 3, p. 734-745.
URIhttp://hdl.handle.net/2117/102134
DOI10.1002/pc.23230
ISSN0272-8397
Publisher versionhttp://onlinelibrary.wiley.com/doi/10.1002/pc.23230/full
Collections
Share: