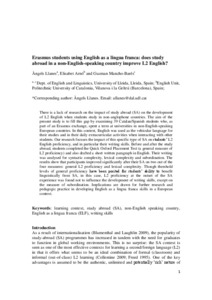 Mancho Bares, Guzman
Document typeArticle
PublisherTaylor & Francis
Rights accessOpen Access
Abstract
There is a lack of research on the impact of study abroad (SA) on the development of L2 English when students study in non-anglophone countries. The aim of the present study is to fill this gap by examining 39 Catalan/Spanish students who, as part of an Erasmus exchange, spent a term at universities in non-English-speaking European countries. In this context, English was used as the vehicular language for their studies and in their daily extracurricular activities when interacting with other students. Our research focuses the impact of this specific type of SA on students’ L2 English proficiency, and in particular their writing skills. Before and after the SA, students completed the Quick Oxford Placement Test (a general measure of L2 proficiency) and also drafted a short written paragraph in English. Their writing was analysed for syntactic complexity, lexical complexity and subordination. The results show that participants improved significantly after their SA on two out of the four measures: general L2 proficiency and lexical complexity. Though threshold levels of general proficiency have been posited for students’ ability to benefit linguistically from SA, in this case, L2 proficiency at the outset of the SA experience was found not to influence the development of writing skills, except on the measure of subordination. Implications are drawn for further research and pedagogic practice in developing English as a lingua franca skills in a European context.
CitationLlanes, A., Arno, E., Mancho, G. Erasmus students using English as a "lingua franca": does study abroad in a non-English-speaking country improve L2 English?. "The Language Learning Journal", 26 Juliol 2016, vol. 44, núm. 3, p. 292-303.
URIhttp://hdl.handle.net/2117/102110
DOI10.1080/09571736.2016.1198099
ISSN1753-2167
Publisher versionhttp://www.tandfonline.com/doi/abs/10.1080/09571736.2016.1198099
Collections
Share: