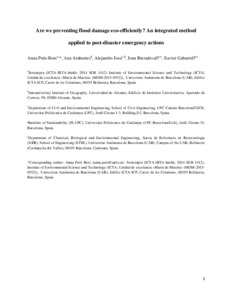 Rieradevall Pons, Joan
Gabarrell Durany, Xavier
Document typeArticle
Rights accessOpen Access
Abstract
Flood damage results in economic and environmental losses in the society, but flood prevention also entails an initial investment in infrastructure. This study presents an integrated eco-efficiency approach for assessing flood prevention and avoided damage. We focused on ephemeral streams in the Maresme region (Catalonia, Spain) to determine the feasibility of post-disaster emergency actions implemented after a major event in hydrologic, environmental and economic terms. Life cycle assessment (LCA) and costing (LCC) were used to determine the eco-efficiency of these actions, and their net impact and payback were calculated by integrating avoided flood damage. Results showed that the actions effectively reduced damage generation when compared to the water flows and rainfall intensities registered. The eco-efficiency of the emergency actions resulted in 1.2 kg CO2eq. per invested euro. When integrating the avoided damage into the initial investment, negative net impacts were obtained (e.g., -5.2E+05 € and -2.9E+04 kg CO2 eq. per event), which suggests that these interventions contributed with environmental and economic benefits to the society. The economic investment was recovered in two years, whereas the design could be improved to reduce their environmental footprint, which is recovered in 25 years. Our method and results highlight the effects of integrating the environmental and economic consequences of decisions at an urban scale and might help the administration and insurance companies in the design of prevention plans and climate change adaptation.
CitationPetit-Boix, A., Arahuetes, A., Josa, A., Rieradevall, J., Gabarrell, X. Are we preventing flood damage eco-efficiently? An integrated method applied to post-disaster emergency actions. "Science of the total environment", Febrer 2017, vol. 580, p. 873-881.
URIhttp://hdl.handle.net/2117/102089
DOI10.1016/j.scitotenv.2016.12.034
ISSN0048-9697
Publisher versionhttp://www.sciencedirect.com/science/article/pii/S004896971632719X
Collections
Share: