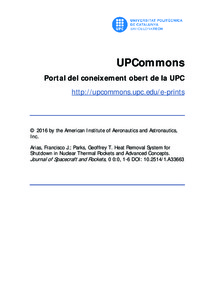 Parks, Geoffrey T.
Document typeArticle
Rights accessOpen Access
Abstract
It is well-known that a nuclear thermal rocket (NTR) cannot be abruptly shut down. After a power manoeuver, the reactor has contaminated itself with fission products and the decay heat released must be removed by maintaining an adequate flow of hydrogen through its passages. The objective of this work was to derive a first estimate of how much hydrogen will be needed to prevent the core from overheating after shutdown, and, from this, be able to assess the advantages of using a dedicated decay heat removal system to reduce or eliminate the amount of hydrogen needed to prevent the core from overheating after shutdown. Furthermore, the use of such a heat removal system could be needed by certain special nuclear thermal propulsion concepts, such as the fission fragment rocket or the more recently proposed pulsed nuclear thermal rocket, where significant amplification of specific impulse, Isp, as well as thrust can be obtained by the direct use of fission fragments or by pulsing the nuclear core, respectively.
Description
© 2016 by the American Institute of Aeronautics and Astronautics, Inc.
CitationArias, F.J., Parks, G. Heat removal system for shutdown in nuclear thermal rockets and advanced concepts. "Journal of spacecraft and rockets", 9 Febrer 2017, vol. 54, num. 4, p.967-972.
URIhttp://hdl.handle.net/2117/102046
DOI10.2514/1.A33663
ISSN0022-4650
Publisher versionhttp://arc.aiaa.org/doi/abs/10.2514/1.A33663
Collections
Share: