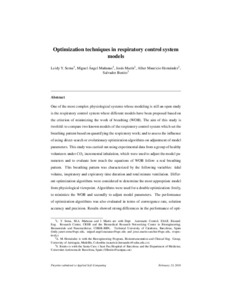 Marín Sánchez, Jesús
Hernández Valdivieso, Alher Mauricio
Benito, S.
Document typeArticle
Rights accessOpen Access
Abstract
One of the most complex physiological systems whose modeling is still an open study is the respiratory control system where different models have been proposed based on the criterion of minimizing the work of breathing (WOB). The aim of this study is twofold: to compare two known models of the respiratory control system which set the breathing pattern based on quantifying the respiratory work; and to assess the influence of using direct-search or evolutionary optimization algorithms on adjustment of model parameters. This study was carried out using experimental data from a group of healthy volunteers under CO2 incremental inhalation, which were used to adjust the model parameters and to evaluate how much the equations of WOB follow a real breathing pattern. This breathing pattern was characterized by the following variables: tidal volume, inspiratory and expiratory time duration and total minute ventilation. Different optimization algorithms were considered to determine the most appropriate model from physiological viewpoint. Algorithms were used for a double optimization: firstly, to minimize the WOB and secondly to adjust model parameters. The performance of optimization algorithms was also evaluated in terms of convergence rate, solution accuracy and precision. Results showed strong differences in the performance of optimization algorithms according to constraints and topological features of the function to be optimized. In breathing pattern optimization, the sequential quadratic programming technique (SQP) showed the best performance and convergence speed when respiratory work was low. In addition, SQP allowed to implement multiple non-linear constraints through mathematical expressions in the easiest way. Regarding parameter adjustment of the model to experimental data, the evolutionary strategy with covariance matrix and adaptation (CMA-ES) provided the best quality solutions with fast convergence and the best accuracy and precision in both models. CMAES reached the best adjustment because of its good performance on noise and multi-peaked fitness functions. Although one of the studied models has been much more commonly used to simulate respiratory response to CO2 inhalation, results showed that an alternative model has a more appropriate cost function to minimize WOB from a physiological viewpoint according to experimental data.
CitationSerna, L., Mañanas, M.A., Marin, J., Hernández, A.M., Benito, S. Optimization techniques in respiratory control system models. "Applied soft computing", 1 Novembre 2016, vol. 48, p. 431-443.
URIhttp://hdl.handle.net/2117/101972
DOI10.1016/j.asoc.2016.07.033
ISSN1568-4946
Publisher versionhttp://www.sciencedirect.com/science/article/pii/S1568494616303684
Collections
Share: