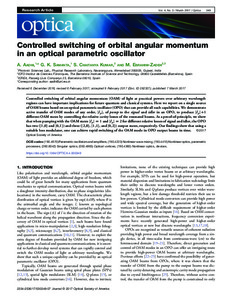 Except where otherwise noted, content on this work is licensed under a Creative Commons license : Attribution-NonCommercial-NoDerivs 3.0 Spain
ProjectMid-TECH - Infrared sensing made visible: Combining infrared light sources and upconversion sensors for improved sensitivity in medical applications and gas analysis (EC-H2020-642661)
Abstract
Controlled switching of orbital angular momentum (OAM) of light at practical powers over arbitrary wavelength regions can have important implications for future quantum and classical systems. Here we report on a single source of OAM beams based on an optical parametric oscillator (OPO) that can provide all such capabilities. We demonstrate active transfer of OAM modes of any order, jl pj, of pump to the signal and idler in an OPO, to produce jl pj1 different OAM states by controlling the relative cavity losses of the resonated beams. As a proof-of-principle, we show that when pumping with the OAM states jl pj 1 and jl pj 2 for different relative losses of signal and idler, the OPO has two (j1;0i and j0;1i) and three (j2;0i, j1;1i, and j0;2i) output states, respectively. Our findings show that using a suitable loss modulator, one can achieve rapid switching of the OAM mode in OPO output beams in time. ©
CitationAadhi, A. [et al.]. Controlled switching of orbital angular momentum in an optical parametric oscillator. "Optica", 7 Març 2017, vol. 4, núm. 3, p. 349-355.
URIhttp://hdl.handle.net/2117/101954
ISSN2334-2536
Publisher versionhttps://www.osapublishing.org/optica/abstract.cfm?uri=optica-4-3-349
Collections
Share: