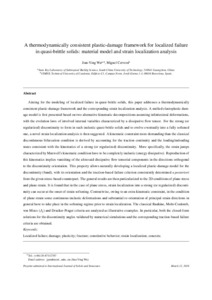 Document typeArticle
Rights accessOpen Access
Abstract
Aiming for the modeling of localized failure in quasi-brittle solids, this paper addresses a thermodynamically consistent plastic-damage framework and the corresponding strain localization analysis. A unified elastoplastic damage model is first presented based on two alternative kinematic decompositions assuming infinitesimal deformations, with the evolution laws of involved internal variables characterized by a dissipative flow tensor. For the strong (or regularized) discontinuity to form in such inelastic quasi-brittle solids and to evolve eventually into a fully softened one, a novel strain localization analysis is then suggested. A kinematic constraint more demanding than the classical discontinuous bifurcation condition is derived by accounting for the traction continuity and the loading/unloading states consistent with the kinematics of a strong (or regularized) discontinuity. More specifically, the strain jumps characterized by Maxwell’s kinematic condition have to be completely inelastic (energy dissipative). Reproduction of this kinematics implies vanishing of the aforesaid dissipative flow tensorial components in the directions orthogonal to the discontinuity orientation. This property allows naturally developing a localized plastic-damage model for the discontinuity (band), with its orientation and the traction-based failure criterion consistently determined a posteriori from the given stress-based counterpart. The general results are then particularized to the 2D conditions of plane stress and plane strain. It is found that in the case of plane stress, strain localization into a strong (or regularized) discontinuity can occur at the onset of strain softening. Contrariwise, owing to an extra kinematic constraint, in the condition of plane strain some continuous inelastic deformations and substantial re-orientation of principal strain directions in general have to take place in the softening regime prior to strain localization. The classical Rankine, Mohr–Coulomb, von Mises (J2) and Drucker–Prager criteria are analyzed as illustrative examples. In particular, both the closed-form solutions for the discontinuity angles validated by numerical simulations and the corresponding traction-based failure criteria are obtained.
CitationWu, J., Cervera, M. A thermodynamically consistent plastic-damage framework for localized failure in quasi-brittle solids: material model and strain localization analysis. "International journal of solids and structures", Juny 2016, vol. 88-89, p. 227-247.
URIhttp://hdl.handle.net/2117/101892
DOI10.1016/j.ijsolstr.2016.03.005
ISSN0020-7683
Publisher versionhttp://www.sciencedirect.com/science/article/pii/S0020768316001244
Collections
Share: