Degree of commutativity of infinite groups 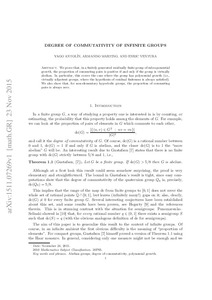 Document typeArticle
Rights accessOpen Access
Abstract
We prove that, in a finitely generated residually finite group of subexponential growth, the proportion of commuting pairs is positive if and only if the group is virtually abelian. In particular, this covers the case where the group has polynomial growth (i.e., virtually nilpotent groups, where the hypothesis of residual finiteness is always satisfied). We also show that, for non-elementary hyperbolic groups, the proportion of commuting pairs is always zero.
Description
First published in Proceedings of the American Mathematical Society in volum 145, number 2, 2016, published by the American Mathematical Society
CitationAntolin, Y., Martino, A., Ventura, E. Degree of commutativity of infinite groups. "Proceedings of the American Mathematical Society", 16 Novembre 2016, vol. 145, núm. 2, p. 479-485.
URIhttp://hdl.handle.net/2117/101873
DOI10.1090/proc/13231
ISSN0002-9939
Collections
Share: