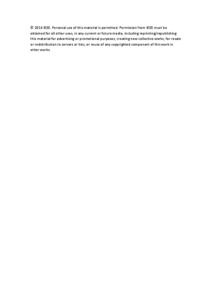 Hernández Valdivieso, Alher Mauricio
Marín Sánchez, Jesús
Benito Vales, Salvador
Document typeArticle
Rights accessOpen Access
Abstract
The respiratory control system is one of the most complex physiological systems, whose controller has been extensively modeled based on the criterion of minimizing work of breathing (WOB). However, cost functions and their related parameters are still an open topic. The aim of this paper is to evaluate different estimates of WOB for given ventilatory demands. Two known computations of mechanical work are compared with regard to an estimate proposed in this paper. Appropriate values for these parameters were found based on the best fitting of the breathing pattern obtained from experimental data during increased hypercapnia. The comparison among them was carried out from their breathing pattern predictability and the physiological viewpoint. For this purpose, two nested optimization processes were performed: minimization of prediction error, with regard to the experimental response, in order to obtain the best estimating parameters; identification of a breathing pattern that minimizes the mechanical WOB. The former was performed using Covariance Matrix Adaptation Evolution Strategy and the latter using sequential quadratic programming. Results show that the estimate proposed in this paper is less sensitive to their parameters and reaches a significantly lower prediction error of breathing pattern during increased ventilatory effort and a better interpretation from a physiological viewpoint.
CitationSerna, L., Mañanas, M.A., Hernández, A.M., Marin, J., Benito, S. Novel Modeling of Work of Breathing for Its Optimization During Increased Respiratory Efforts. "IEEE systems journal", 1 Setembre 2016, vol. 10, núm. 3, p. 1003-1013.
URIhttp://hdl.handle.net/2117/101871
DOI10.1109/JSYST.2014.2323114
ISSN1932-8184
Publisher versionhttp://ieeexplore.ieee.org/document/6828719/?arnumber=6828719
Collections
Share: