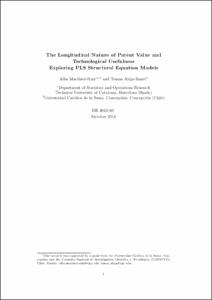 The purpose of this paper is to investigate the evolution of patent value and technological usefulness over time using longitudinal structural equation models. The variables are modeled as endogenous unobservable variables which depend on three exogenous constructs: the knowledge stock used by companies to create their inventions, the technological scope of the inventions and the international scope of protection. Two set-ups are explored. The rst longitudinal model includes time-dependent manifest variables and the second includes time-dependent unobservable variables. The structural equation models are estimated using Partial Least Squares Path Modelling. We showed that there is a trade-o between the exogenous latent variables and technological usefulness over time. This means that the former variables become less important and the latter more important as time passes.
Is part ofDR 2010/05
URIhttp://hdl.handle.net/2117/10187