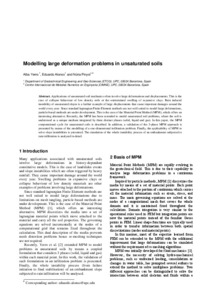 Except where otherwise noted, content on this work is licensed under a Creative Commons license : Attribution 3.0 Spain
Abstract
Applications of unsaturated soil mechanics often involve large deformations and displacements. This is the case of collapse behaviour of low density soils or the unrestrained swelling of expansive clays. Rain induced instability of unsaturated slopes is a further example of large displacements that cause important damages around the world every year. Since standard lagrangian Finite Element methods are not well suited to model large deformations, particle-based methods are under development. This is the case of the Material Point Method (MPM), which offers an interesting alternative. Recently, the MPM has been extended to model unsaturated soil problems, where the soil is understood as a unique medium integrated by three distinct phases (solid, liquid and gas). In this paper, the MPM computational cycle for unsaturated soils is described. In addition, a validation of the 3-phase MPM approach is presented by means of the modelling of a one-dimensional infiltration problem. Finally, the applicability of MPM to solve slope instabilities is presented. The simulation of the whole instability process of an embankment subjected to rain infiltration is analysed in detail.
CitationYerro, A., Alonso, E., Pinyol, N. Modelling large deformation problems in unsaturated soils. A: European Conference on Unsaturated Soils. "3rd European Conference on Unsaturated Soils: E-UNSAT 2016, Paris, France, September 12-14, 2016". París: E3S Web of Conferences, 2016, p. 1-6.
URIhttp://hdl.handle.net/2117/101860
DOI10.1051/e3sconf/20160908019
Publisher versionhttp://www.e3s-conferences.org/articles/e3sconf/abs/2016/04/e3sconf_eunsat2016_08019/e3sconf_eunsat2016_08019.html
Collections
Share: