International overview on the legal framework for highly automated vehicles 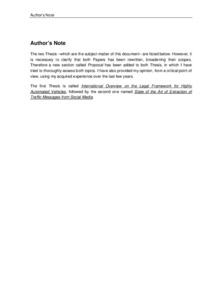 International Overview on the Legal Framework for Highly Automated Vehicles & State of the Art of Extraction of Traffic Messages from Social Media.pdf (2,286Mb)
Share:

CovenanteeTechnische Universität München
Document typeBachelor thesis
Rights accessOpen Access
Abstract
The evolution of Autonomous and automated technologies during the last decades has been constant and maintained. All of us can remember an old film, in which they shown us a driverless car, and we thought it was just an unreal object born of filmmakers imagination. However, nowadays Highly Automated Vehicles are a reality, even not in our daily lives. Hardly a day we don’t have news about Tesla launching a new model or Google showing the new features of their autonomous car. But don’t have to travel far away from our borders. Here in Europe we also can find different companies trying, with more or less success depending on with, not to be lagged behind in this race. But today their biggest problem is not only the liability of their innovative technology, but also the legal framework for Highly Automated Vehicles. As a quick summary, in only a few countries they have testing licenses, which not allow them to freely drive, and to the contrary most nearly ban their use. The next milestone in autonomous driving is to build and homogeneous, safe and global legal framework. With this in mind, this paper presents an international overview on the legal framework for Highly Automated Vehicles. We also present de different issues that such technologies have to face to and which they have to overcome in the next years to be a real and daily technology.
SubjectsEnergy consumption, Energia -- Consum, Vehicles autònoms
URIhttp://hdl.handle.net/2117/101814
Collections
Share: