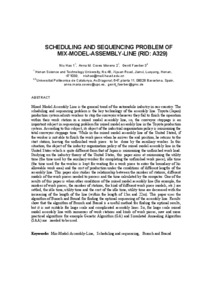 Mixed Model Assembly Line is the general trend of the automobile industry in our country. The scheduling and sequencing problem is the key technology of the assembly line. Toyota (Japan) production system admits workers to stop the conveyor whenever they fail to finish the operation within their work station in a mixed model assembly line, so, the conveyor stoppage is an important subject in sequencing problem for mixed model assembly line in the Toyota production system. According to this subject, its object of the industrial organization policy is minimizing the total conveyor stoppage time. While in the mixed model assembly line of the United Stated, if the worker is not able to finish the work piece when he arrives the end position, he returns to the start station, leaving the unfinished work piece to be done by the auxiliary worker. In this situation, the object of the industry organization policy of the mixed model assembly line in the United States which is quite different from that of Japan is minimizing the unfinished work load. Studying on the industry theory of the United States, this paper aims at minimizing the utility time (the time used by the auxiliary worker for completing the unfinished work piece), idle time (the time used for the worker is kept for waiting for a work piece to enter the boundary of his allowable work area) and the cost of production under the conditions of different lengths of the assembly line. This paper also studies the relationship between the number of stations, different models of the work pieces needed to process and the time calculated by the computer. One of the results of this paper is when other conditions of the mixed model assembly line (for example, the number of work pieces, the number of stations, the kind of different work piece models, etc.) are settled, the idle time, utility time and the cost of the idle time, utility time are decreased with the increasing of the length of the line (within the length of 15m and 22m). This paper uses the algorithm of Branch and Bound for finding the optimal sequencing of the assembly line. Results show that the algorithm of Brunch and Bound is a useful method for finding the optimal results, but it is not suitable for large scale and complicated assembly lines. So, for large scale mixed model assembly line with numerous of work stations and kinds of work pieces, new and more practiced algorithms for example Genetic Algorithm (GA) and Simulated Annealing Algorithm (SAA) are needed to be used.
URIhttp://hdl.handle.net/2117/1018