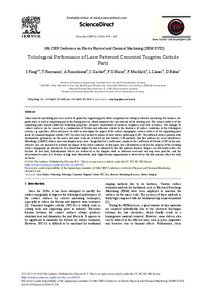 Bähre, Dirk
Document typeArticle
PublisherElsevier
Rights accessOpen Access
Abstract
Some tools for machining processes used to be guided by supporting parts while using them for cutting or abrasive machining. For instance, the guide stone is used as supporting part in the honing process, which maintains the concentricity of the rotating axis. The contact surfaces of the supporting parts should exhibit the following properties: adequate combination of hardness, toughness and wear resistance. The damage of contact surfaces can be caused by a combination of friction and adhesion, related to the weakness of surface conditions in the tribological system, e.g. asperities, debris and pores. In order to investigate the impact of the surface topography, contact surfaces of the supporting parts made of cemented tungsten carbide (WC-Co) have been treated by means of laser surface patterning (LSP). Two different surface patterns with deterministic geometries on the micro and nano scale are achieved by two distinct LSP methods: line-like patterns by Laser-Interference Metallurgy (LIMET) with ns-laser and dimples by ps-laser. Tangential force coefficients, similar to the coefficient of friction (COF) in the non-abrasive case, are measured to evaluate the impact of the surface patterns. In this paper, the LSP methods as well as the analysis of the resulting surface topography are introduced. It is found that higher friction is obtained by line-like patterns whereas dimples can efficiently reduce the friction. At low load, hydrodynamic effects are reinforced as the dimples work as lubricant reservoirs and trap wear particles, and the observation becomes less obvious at high load. Meanwhile, only slight friction augmentation is observed by line-like patterns when the load increases.
CitationFang, S., Herrmann, T., Rosenkranz, A., Gachot, C., Marro, F.G., Mücklich, F., Llanes, L., Bähre, D. Tribological performance of laser patterned cemented tungsten carbide parts. "Procedia CIRP", 2016, vol. 42, p. 439-443.
URIhttp://hdl.handle.net/2117/101774
DOI10.1016/j.procir.2016.02.228
ISSN2212-8271
Publisher versionhttp://www.sciencedirect.com/science/article/pii/S2212827116005126
Collections
Share: