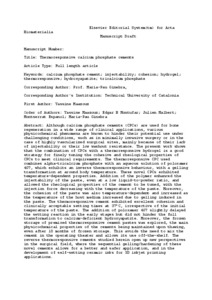 Except where otherwise noted, content on this work is licensed under a Creative Commons license : Attribution-NonCommercial-NoDerivs 3.0 Spain
Abstract
Although calcium phosphate cements (CPCs) are used for bone regeneration in a wide range of clinical applications, various physicochemical phenomena are known to hinder their potential use in minimally invasive surgery or in highly vascularized surgical sites, mainly because of their lack of injectability or their low washout resistance. The present work shows that the combination of CPCs with an inverse-thermoresponsive hydrogel is a good strategy for finely tuning the cohesive and rheological properties of CPCs to achieve clinical acceptable injectability to prevent phase separation during implantation and cohesion to avoid washout of the paste. The thermoresponsive CPC developed combines alpha-tricalcium phosphate with an aqueous solution of pluronic F127, which exhibits an inverse thermoresponsive behaviour, with a gelling transformation at around body temperature. These novel CPCs exhibited temperature-dependent properties. Addition of the polymer enhanced the injectability of the paste, even at a low liquid-to-powder ratio, and allowed the rheological properties of the cement to be tuned, with the injection force decreasing with the temperature of the paste. Moreover, the cohesion of the paste was also temperature-dependent and increased as the temperature of the host medium increased due to gelling induced in the paste. The thermoresponsive cement exhibited excellent cohesion and clinically acceptable setting times at 37 °C, irrespective of the initial temperature of the paste. The addition of pluronic F127 slightly delayed the setting reaction in the early stages but did not hinder the full transformation to calcium-deficient hydroxyapatite. Moreover, the frozen storage of premixed thermoresponsive cement pastes was explored, the main physicochemical properties of the cements being maintained upon thawing, even after 18 months of frozen storage. This avoids the need to mix the cement in the operating theatre and allows its use off-the-shelf. The reverse thermoresponsive cements studied herein open up new perspectives in the surgical field, where the sequential gelling/hardening of these novel cements could allow for a better and safer clinical application.
CitationMaazouz, Y., Montufar, E., Malbert, J., Español, M., Ginebra, M. Self-hardening and thermoresponsive alpha tricalcium phosphate/pluronic pastes. "Acta biomaterialia", Febrer 2017, vol. 49, p. 563-574.
URIhttp://hdl.handle.net/2117/101773
DOI10.1016/j.actbio.2016.11.043
ISSN1742-7061
Publisher versionhttp://www.sciencedirect.com/science/article/pii/S1742706116306407
Collections
Share: