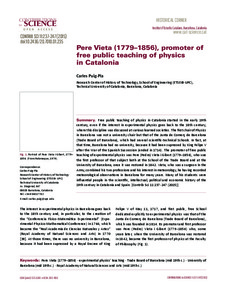 Document typeArticle
Rights accessOpen Access
Abstract
Free public teaching of physics in Catalonia started in the early 19th century, even if the interest in experimental physics goes back to the 18th century, where this discipline was discussed at various learned societies. The first chair of Physics in Barcelona was not a university chair but that of the Junta de Comerç de Barcelona (Trade Board of Barcelona), which had several scientific-technical Schools. In fact, at that time, Barcelona had no university, because it had been supressed by King Felipe V after the War of the Spanish Succession (ended in 1714). The promoter of free public teaching of experimental physics was Pere (Pedro) Vieta i Gibert (17791856), who was the first professor of that subject both at the School of the Trade Board and at the University of Barcelona, once it was restored in 1842. Vieta, who was a surgeon in the Army, combined his two professions and his interest in meteorology, he having recorded meteorological observations in Barcelona for many years. Many of his students were influential people in the scientific, intellectual, political and economic history of the 19th century in Catalonia and Spain. [Contrib Sci 11:237-247 (2015)]
CitationPuig, C. Pere Vieta (1779–1856), promoter of free public teaching of physics in Catalonia. "Contributions to science", 2015, vol. 11, núm. 2, p. 237-247.
URIhttp://hdl.handle.net/2117/101753
DOI10.2436/20.7010.01.235
ISSN1575-6343
Publisher versionhttp://130.206.88.107/revistes224/index.php/CtS/issue/view/9439/showToc
Collections
Share: