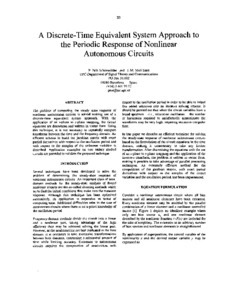 Except where otherwise noted, content on this work is licensed under a Creative Commons license : Attribution-NonCommercial-NoDerivs 3.0 Spain
Abstract
The problem of computing the steady state response of nonlinear autonomous circuits is solved making use of a discrete-time equivalent system approach. With the application of an s-plane to z-plane mapping, the circuit equations are discretized and written in vector form. Using this technique, it is not necessary to repeatedly compute transforms between the time and the frequency domain. An efficient scheme to build the Jacobian matrix with exact partial derivatives with respect to the oscillation period and with respect to the samples of the unknown variables is described. Application examples on two widely studied circuits are provided to validate the proposed technique.
CitationPalà-Schönwälder, P., Miro, J. A discrete-time equivalent system approach to the periodic response of nonlinear autonomous circuits. A: IEEE International Symposium on Circuits and Systems. "Proceedings of the 1994 International Symposium on Circuits and Systems". Londres: 1994, p. 33-36.
URIhttp://hdl.handle.net/2117/101717
DOI10.1109/ISCAS.1994.409520
Publisher versionhttp://ieeexplore.ieee.org/document/409520/
Collections
Share: