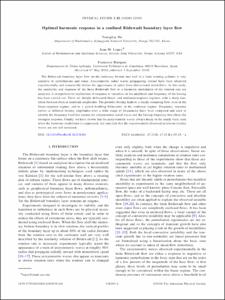 Document typeArticle
Rights accessOpen Access
Abstract
The Bödewadt boundary layer flow on the stationary bottom end wall of a finite rotating cylinder is very sensitive to perturbations and noise. Axisymmetric radial waves propagating inward have been observed experimentally and numerically before the appearance of spiral three-dimensional instabilities. In this study, the sensitivity and response of the finite Bödewadt flow to a harmonic modulation of the rotation rate are analyzed. A comprehensive exploration of response to variations in the amplitude and frequency of the forcing has been carried out. There are sharply delineated linear- and nonlinear-response regimes, with a sharp transition between them at moderate amplitudes. The periodic forcing leads to a steady-streaming flow, even in the linear-response regime, and to a period-doubling bifurcation in the nonlinear regime. Frequency response curves at different forcing amplitudes over a wide range of frequencies have been computed and used to identify the frequency band that excites the axisymmetric radial waves and the forcing frequency that elicits the strongest response. Finally, we have shown that the axisymmetric waves always decay to the steady basic state when the harmonic modulation is suppressed, and conclude that the experimentally observed persistent circular waves are not self-sustained.
CitationYounghae, D.; Lopez, J. M.; Marques, F. Optimal harmonic response in a confined Bödewadt boundary layer flow. "Physical review E: statistical, nonlinear, and soft matter physics", 01 Setembre 2010, vol. 82, p. 036301-1-036301-08.
URIhttp://hdl.handle.net/2117/10157
DOI10.1103/PhysRevE.82.036301
ISSN1539-3755
Publisher versionhttp://math.asu.edu/~lopez/pdf/pre_DLM10.pdf
Collections
Share: