Colonic content in health and its relation to functional gut symptoms 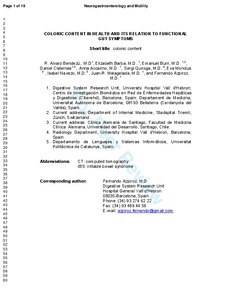 Malagelada Benapres, Juan Ramon
Azpiroz Vidaur, Fernando
Document typeArticle
Rights accessOpen Access
All rights reserved. This work is protected by the corresponding intellectual and industrial property rights. Without prejudice to any existing legal exemptions, reproduction, distribution, public communication or transformation of this work are prohibited without permission of the copyright holder
Abstract
Gut content may be determinant in the generation of digestive symptoms, particularly in patients with impaired gut function and hypersensitivity. Since the relation of intraluminal gas to symptoms is only partial, we hypothesized that non-gaseous component may play a decisive role. Methods: Abdominal computed tomography scans were evaluated in healthy subjects during fasting and after a meal (n = 15) and in patients with functional gut disorders during basal conditions (when they were feeling well) and during an episode of abdominal distension (n = 15). Colonic content and distribution were measured by an original analysis program. Key results: In healthy subjects both gaseous (87 ± 24 mL) and non-gaseous colonic content (714 ± 34 mL) were uniformly distributed along the colon. In the early postprandial period gas volume increased (by 46 ± 23 mL), but non-gaseous content did not, although a partial caudad displacement from the descending to the pelvic colon was observed. No differences in colonic content were detected between patients and healthy subjects. Symptoms were associated with discrete increments in gas volume. However, no consistent differences in non-gaseous content were detected in patients between asymptomatic periods and during episodes of abdominal distension. Conclusions & inferences: In patients with functional gut disorders, abdominal distension is not related to changes in non-gaseous colonic content. Hence, other factors, such as intestinal hypersensitivity and poor tolerance of small increases in luminal gas may be involved.
Description
This is the peer reviewed version of the following article: Bendezú, R. A., Barba, E., Burri, E., Cisternas, D., Accarino, A., Quiroga, S., Monclus, E., Navazo, I., Malagelada, J.-R. and Azpiroz, F. (2016), Colonic content in health and its relation to functional gut symptoms. Neurogastroenterol. Motil., 28: 849–854, which has been published in final form at [doi:10.1111/nmo.12782]. This article may be used for non-commercial purposes in accordance with Wiley Terms and Conditions for Self-Archiving
CitationBendezú, Á., Barba, E., Burri, E., Cisternas, D., Accarino, A., Quiroga, S., Monclús, E., Navazo, I., Malagelada, J., Azpiroz, F. Colonic content in health and its relation to functional gut symptoms. "Neurogastroenterology and motility", 12 Febrer 2016, vol. 28, núm. 6, p. 849-854.
URIhttp://hdl.handle.net/2117/101537
DOI10.1111/nmo.12782
ISSN1350-1925
Publisher versionhttp://onlinelibrary.wiley.com/doi/10.1111/nmo.12782/full
Collections
Share: