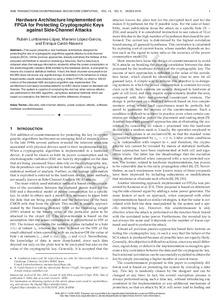 Cantó Navarro, Enrique
Document typeArticle
PublisherInstitute of Electrical and Electronics Engineers (IEEE)
Rights accessOpen Access
Abstract
This paper presents a new hardware architecture designed for protecting the key of cryptographic algorithms against attacks by side-channel analysis (SCA). Unlike previous approaches already published, the fortress of the proposed architecture is based on revealing a false key. Such a false key is obtained when the leakage information, related to either the power consumption or the electromagnetic radiation (EM) emitted by the hardware device, is analysed by means of a classical statistical method. In fact, the trace of power consumption (or the EM) does not reveal any significant sign of protection in its behaviour or shape. Experimental results were obtained by using a Virtex 5 FPGA, on which a 128-bit version of the standard AES encryption algorithm was implemented. The architecture could easily be extrapolated to an ASIC device based on standard cell libraries. The system is capable of concealing the real key when various attacks are performed on the AES algorithm, using two statistical methods which are based on correlation, the Welch’s t-test and the difference of means.
CitationLumbiarres, R., Lopez, M., Cantó, E. Hardware architecture implemented on FPGA for protecting cryptographic keys against side-channel attacks. "IEEE transactions on dependable and secure computing", 19 Setembre 2016, vol. 15, núm. 5, p. 898-905.
URIhttp://hdl.handle.net/2117/101518
DOI10.1109/TDSC.2016.2610966
ISSN1545-5971
Publisher versionhttp://ieeexplore.ieee.org/document/7571149/
Collections
Share: