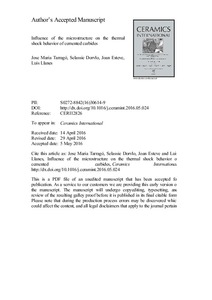 Document typeArticle
Rights accessOpen Access
Abstract
The influence of single and repetitive sudden changes of temperature on the mechanical integrity of cemented carbides was investigated as a function of their microstructure. Thermal shock resistance was assessed by testing the residual flexural strength of hardmetal beams after being subjected to thermal shock by water quenching. Results indicate that hard cemented carbides tend to exhibit a superior resistance to the nucleation of thermal shock damage but a lower resistance to the propagation of this damage mechanism than tough grades, and vice versa. These trends are in agreement with those expected from the evaluation of the thermal shock Hasselman’s parameters. The evidenced strength loss after thermal shock may be related to the subcritical growth of intrinsic flaws driven by localized microcracking surrounding them. Results also point out on Ni-base hardmetals to exhibit a slightly higher resistance to abrupt changes of temperature than Co-base ones.
CitationTarragó, J.M., Dorvlo, S., Esteve, J., Llanes, L. Influence of the microstructure on the thermal shock behavior of cemented carbides. "Ceramics international", 15 Agost 2016, vol. 42, núm. 11, p. 12701-12708.
URIhttp://hdl.handle.net/2117/101433
DOI10.1016/j.ceramint.2016.05.024
ISSN0272-8842
Publisher versionhttp://www.sciencedirect.com/science/article/pii/S0272884216306149
Collections
Share: