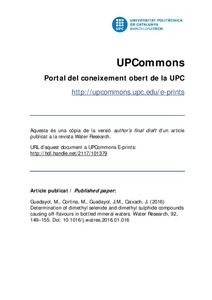 Caixach Gamisans, Josep
Document typeArticle
Rights accessOpen Access
Abstract
Sales of bottled drinking water have shown a large growth during the last two decades due to the general belief that this kind of water is healthier, its flavour is better and its consumption risk is lower than that of tap water. Due to the previous points, consumers are more demanding with bottled mineral water, especially when dealing with its organoleptic properties, like taste and odour. This work studies the compounds that can generate obnoxious smells, and that consumers have described like swampy, rotten eggs, sulphurous, cooked vegetable or cabbage. Closed loop stripping analysis (CLSA) has been used as a pre-concentration method for the analysis of off-flavour compounds in water followed by identification and quantification by means of GC-MS. Several bottled water with the aforementioned smells showed the presence of volatile dimethyl selenides and dimethyl sulphides, whose concentrations ranged, respectively, from 4 to 20 ng/L and from 1 to 63 ng/L. The low odour threshold concentrations (OTCs) of both organic selenide and sulphide derivatives prove that several objectionable odours in bottled waters arise from them. Microbial loads inherent to water sources, along with some critical conditions in water processing, could contribute to the formation of these compounds. There are few studies about volatile organic compounds in bottled drinking water and, at the best of our knowledge, this is the first study reporting the presence of dimethyl selenides and dimethyl sulphides causing odour problems in bottled waters
CitationGuadayol, M., Cortina, M., Guadayol, J., Caixach, J. Determination of dimethyl selenide and dimethyl sulphide compounds causing off-flavours in bottled mineral waters. "Water research (Oxford)", 22 Gener 2016, vol. 92, p. 149-155.
URIhttp://hdl.handle.net/2117/101379
DOI10.1016/j.watres.2016.01.016
ISSN0043-1354
Publisher versionhttp://www.sciencedirect.com/science/article/pii/S0043135416300161
Collections
Share: