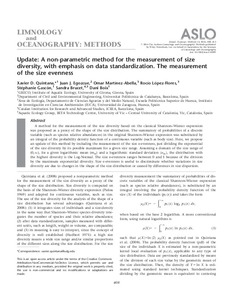 Martinez Abella, Omar
Lopez Florez, Rocio
Gascon, Stephanie
Brucet, Sandra
Boix, Daniel
Document typeArticle
Rights accessOpen Access
Abstract
A method for the measurement of the size diversity based on the classical Shannon–Wiener expression was proposed as a proxy of the shape of the size distribution. The summatory of probabilities of a discrete variable (such as species relative abundances) in the original Shannon–Wiener expression was substituted by an integral of the probability density function of a continuous variable (such as body size). Here, we propose an update of this method by including the measurement of the size e-evenness, just dividing the exponential of the size diversity by its possible maximum for a given size range. Assuming a domain of the size range of (0,8), for a given logarithmic mean ( math formula) and a logarithmic standard deviation math formula, the distribution with the highest diversity is the Log-Normal. The size e-evenness ranges between 0 and 1 because of the division by the maximum exponential diversity. Size e-evenness is useful to discriminate whether variations in size diversity are due to changes in the shape of the size distribution or caused by differences in size dispersion.
CitationQuintana, X., Egozcue, J. J., Martinez, O., Lopez, R., Gascon, S., Brucet, S., Boix, D. Update: A non-parametric method for the measurement of size diversity, with emphasis on data standardization. The measurement of the size evenness. "Limnology and oceanography-Methods", Juny 2016, vol. 14, núm. 6, p. 408-413.
URIhttp://hdl.handle.net/2117/101359
DOI10.1002/lom3.10099
ISSN1541-5856
Publisher versionhttp://onlinelibrary.wiley.com/doi/10.1002/lom3.10099/abstract
Collections
Share: