Are the Pyrenees a barrier for the transport of birch (Betula) pollen from Central Europe to the Iberian Peninsula? 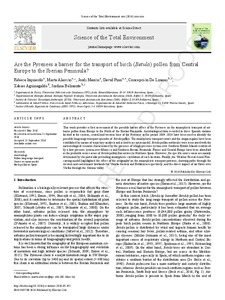 Except where otherwise noted, content on this work is licensed under a Creative Commons license : Attribution-NonCommercial-NoDerivs 3.0 Spain
Abstract
This work provides a first assessment of the possible barrier effect of the Pyrenees on the atmospheric transport of airborne pollen from Europe to the North of the Iberian Peninsula. Aerobiological data recorded in three Spanish stations located at the eastern, central and western base of the Pyrenees in the period 2004–2014 have been used to identify the possible long range transport episodes of Betula pollen. The atmospheric transport routes and the origin regions have been established by means of trajectory analysis and a source receptor model. Betula pollen outbreaks were associated with the meteorological scenario characterized by the presence of a high-pressure system overm over Morocco and Southern Iberian Peninsula. France and Central Europe have been identified as the probable source areas of Betula pollen that arrives to Northern Spain. However, the specific source areas are mainly determined by the particular prevailing atmospheric circulation of each location. Finally, the Weather Research and Forecasting model highlighted the effect of the orography on the atmospheric transport patterns, showing paths through the western and easternmost lowlands for Vitoria-Gasteiz and Bellaterra respectively, and the direct impact of air flows over Vielha through the Garona valley.
CitationIzquierdo, R., Alarcon, M., Mazon, J., Pino, D., De Linares, C., X. Aguinagalde, Belmonte, J. Are the Pyrenees a barrier for the transport of birch (Betula) pollen from Central Europe to the Iberian Peninsula?. "Science of the total environment", 1 Gener 2017, vol. 575, p. 1183-1196.
URIhttp://hdl.handle.net/2117/101352
DOI10.1016/j.scitotenv.2016.09.192
ISSN0048-9697
Publisher versionhttp://www.sciencedirect.com/science/article/pii/S0048969716321222
Collections
Share: