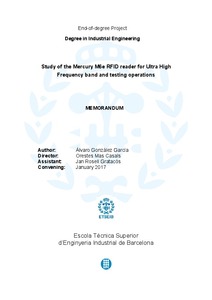 Pg. 6 Report 1 Introduction 1.1 Abstract In order to sum up the whole work done here, we must begin explaining with a fast overview of the contents that are going to appear below. At the beginning of the semester, the UPC bought the M6e RFID for UHF reader from mercury in the interest of make some research at experimental level and stating constancy of the knowhow of the equipment operation. This project defines not only the operation but also the scope and design of that knew tool, very useful in a few years but not commonly implemented nowadays. Another target of this research is to know how far can we arrive modifying some parameters from the equipment or try to implement new ones in order to optimize their functions to the maximum. Aside from those intentions, the idea of creating some kind of Python language wrappers (bindings) in order to call functions from the library written in C of the mercury API has been raised. The final purpose is to take control of the RFID system through a Python program by calling C functions in the vendor provided library. The reason why this study is being carried out is with the aspirations of implementing this system in a range of different possible applications. A personal aspiration is to take it to robotics applications such as mapping localization of the land and also finder stuff radar, as an example. It can be taken too for the supermarket cashier, thing that would make the job in a faster and easier way than current existing barcodes. The methods used here are basically two: in one hand, we must name the experimental work at the IOC’s Laboratory with the physical equipment which gets along with a software (Universal Reader Assistant) and in the other hand, with the help of two programming languages such as Python and C for the achievement of creating the bindings.
SubjectsRobots -- Design and construction, Robòtica -- Disseny
URIhttp://hdl.handle.net/2117/101331