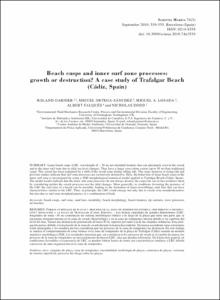 Dodd, Nicholas
Document typeArticle
Rights accessOpen Access
Abstract
Large beach cusps (LBC, wavelength of ~ 30 m) are intertidal features that can alternately exist in the swash and in the inner surf zone due to tidal sea level changes. They have a larger cross-shore extent (up to 50 m) than traditional cusps. This extent has been explained by a shift of the swash zone during falling tide. The cusps immerse at rising tide and previous studies indicate that surf zone processes are exclusively destructive. Here, the behaviour of large beach cusps in the inner surf zone is investigated by using a 2DH morphological numerical model applied to Trafalgar Beach (Cádiz, Spain). The model results indicate that the inner surf zone processes do not always destroy the cusps but can in fact reinforce them by considering neither the swash processes nor the tidal changes. More generally, in conditions favouring the presence of the LBC the surf zone of a beach can be unstable, leading to the formation of transverse/oblique sand bars that can have characteristics similar to the LBC. Thus, in principle, the LBC could emerge not only due to swash zone morphodynamics but also due to surf zone morphodynamics or a combination of both.
CitationGarnier, R. [et al.]. Beach cusps and inner surf zone processes: growth or destruction? A case study of Trafalgar Beach (Cadiz, Spain). "Scientia marina", Setembre 2010, vol. 74, núm. 3, p. 539-553.
URIhttp://hdl.handle.net/2117/10130
DOI10.3989/scimar.2010.74n3539
ISSN0214-8358
Publisher versionhttp://www.erevistas.csic.es/ficha_articulo.php?url=oai:scientiamarina.revistas.csic.es:article/1181&oai_iden=oai_revista326
Collections
Share: