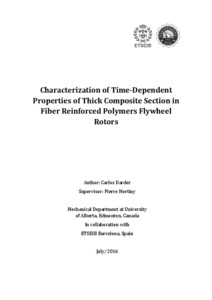 Show full item record
Darder Bennassar, Carles
Tutor / director / evaluatorMertiny, Pierre
CovenanteeUniversity of Alberta. Department of Mechanical Engineering
Document typeMaster thesis
Rights accessOpen Access
Abstract
This project is focused in the research of a suitable model to characterize the time dependent mechanical properties of fiber reinforced polymers as the viscoelastic behavior. This model will be based in experimental data obtained from several tests that have to be designed and performed, in this thesis several procedures are designed and tried with up to 4 different testing machines and procedures which involves dynamic mechanical analyzer, and different models of electromagnetically based testing machines from BOSE company, using either water bath chambers and convection oven chambers for temperature control. The final purpose is to predict long term creep compliance and stress relaxation in a FRP flywheel rotor that has to be built and assembly in the future, this will guarantee safety and the integrity of the rotor after assembly and during its lifetime. More than fifty compression tests have been conducted using cubical specimens cut directly from the winding rotor and tested in the transverse direction which was the critical dimension. The material tested was a composite made of epoxy (EPON 826 with the curing agent Epikure 9551) reinforced with glass fiber in the circumferential direction of the flywheel rotor. The results of the tests show that the initially proposed variables for describing the viscoelasticity such as the temperature, the age of the polymer and the stress level of load applied have no confirmed correlation with the creep response, and hence further research is needed.
SubjectsPolymers, Polímers
URIhttp://hdl.handle.net/2117/101171
Collections
Share: