Design and construction of an electric autonomous driving vehicle 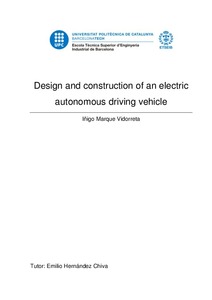 Document typeMaster thesis
Rights accessOpen Access
Abstract
The objective of this project consisted on creating a vehicle able to repeat a trajectory it had followed before, driven by a human. The system would have sensors to detect the obstacles and to be able to react according to their position. Many extra sensors were used in order to measure the deformation of the suspensions, the wheel speed… It was also considered using a GPS, a gyroscope, an accelerometer… to compare the information given by them with the orders followed by the CPU, as well as a light sensor (LDR) to help deciding if the camera and the computer vision algorithm should be used. Without much light, it could consider parking in the nearest possible spot. It was also proposed using a spotlight. Also, a pressure sensor was considered to be located inside the seat, in order to detect if there was somebody sitting on it or not. If none was sitting, the car would stop. However, some ideas were considered to not be primary and were saved for a posterior version of the vehicle. This project consists also on leading a group of Russian students, which were separated in six groups, two of them related with making the vehicle autonomous. With their help, this project could reach to its end and the autonomous vehicle was ended successfully.
SubjectsRobotics, Robòtica
URIhttp://hdl.handle.net/2117/101119
Collections
Share: