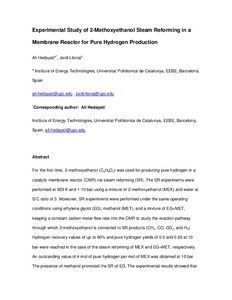 Document typeArticle
Rights accessOpen Access
Abstract
For the first time, 2-methoxyethanol (C3H8O2) was used for producing pure hydrogen in a catalytic membrane reactor (CMR) via steam reforming (SR). The SR experiments were performed at 923 K and 1–10 bar using a mixture of 2-methoxyethanol (MEX) and water at S/C ratio of 3. Moreover, SR experiments were performed under the same operating conditions using ethylene glycol (EG), methanol (MET), and a mixture of EG + MET, keeping a constant carbon molar flow rate into the CMR to study the reaction pathway through which 2-methoxyethanol is converted to SR products (CH4, CO, CO2, and H2). Hydrogen recovery values of up to 90% and pure hydrogen yields of 0.5 and 0.63 at 10 bar were reached in the case of the steam reforming of MEX and EG + MET, respectively. An outstanding value of 4 mol of pure hydrogen per mol of MEX was obtained at 10 bar. The presence of methanol promoted the SR of EG. The experimental results showed that 2-methoxyethanol is a promising source for producing hydrogen, especially in a CMR where a better efficiency (complete fuel conversion and high hydrogen yield) is reached.
CitationHedayati, A., Llorca, J. Experimental study of 2-methoxyethanol steam reforming in a membrane reactor for pure hydrogen production. "Fuel (Guildford)", 15 Febrer 2017, vol. 190, p. 312-317.
URIhttp://hdl.handle.net/2117/101049
DOI10.1016/j.fuel.2016.11.004
ISSN0016-2361
Publisher versionhttp://www.sciencedirect.com/science/article/pii/S0016236116310973
Collections
Share: