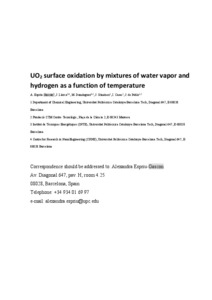 Except where otherwise noted, content on this work is licensed under a Creative Commons license : Attribution-NonCommercial-NoDerivs 3.0 Spain
Abstract
In the present work, X-Ray Photoelectron Spectroscopy (XPS) was used to study the effect of water vapor on the UO2 surface as a function of temperature. The experiments were performed in situ inside a high pressure chamber attached to the XPS instrument. UO2 samples were put in contact with either hydrogen or argon streams, saturated with water at room temperature, and the sample surface evolution was analyzed by XPS. In the case of the water vapor/argon experiments, one experiment at 350°C was performed and, in the case of the water vapor/hydrogen experiments, the temperatures used inside the reactor were 60, 120, 200 and 350°C. On one hand, in presence of argon, the results obtained showed that the water vapor in the argon stream oxidized 93% of the U(IV) in the sample surface. On the other hand, the degree of UO2 surface oxidation showed a different dependence on the temperature in the experiments performed in the presence of hydrogen: the maximum surface oxidation occurred at 120°C, where 65.4% of U(IV) in the sample surface was oxidized, while at higher temperatures, the surface oxidation decreased. This observation is attributed to the increase of hydrogen reducing effect when temperature increases which prevents part of the oxidation of the UO2 surface by the water vapor.
CitationEspriu-Gascon, A., Llorca, J., Dominguez, M., Gimenez, F., Casas, I., Pablo, J. UO2 surface oxidation by mixtures of water vapor and hydrogen as a function of temperature. "Journal of nuclear materials", 1 Desembre 2015, vol. 467, p. 240-243.
URIhttp://hdl.handle.net/2117/101045
DOI10.1016/j.jnucmat.2015.09.047
ISSN0022-3115
Publisher versionhttp://www.sciencedirect.com/science/article/pii/S0022311515302361
Collections
Share: