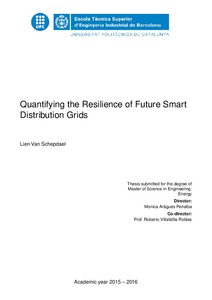 Smart distributed power systems are an important part of the energy shift that is currently taking place. Electricity generation, as well as power system control is moving from central operation towards local distribution grid operation, mainly due to the new possibilities that come along with distributed energy resources (DERs). These allow local consumers to generate their own electricity (prosumer), and offer support services to the grid, such as frequency control for example. Smart distributed grids can improve the local operation of DERs by coordinating demand and supply in real-time, and as such improve the power quality of the distribution grid, as well as improve the security of energy supply on local level. However, intelligent control systems, such as design of the H2020 project EMPOWER that will be used in this work, bring along complex new interconnections in the distribution grid, that may lead to increased risk of failure propagations in the distribution grid. As this, and several other challenges of the smart distributed grid could counteract the anticipated benefits, the need arises to evaluate how well an intelligent control system can cope with constantly evolving interconnections in the distribution grid, with the addition of new technologies, with the grid vulnerabilities regarding cyber security, etc. Evaluating how a system behaves when going through changing conditions, or when undergoing a disturbance, can be defined as resilience analysis, and this is what this thesis will be about. First, resilience will be defined in the context of smart distributed power systems through an extensive literature review, after which a resilience framework will be developed, based on the existing EMPOWER smart distribution grid. The technical characteristics, as well as the functionalities of the system will be defined and represented in an entity-relationship model. This model will serve as a basis to assess the level of dependencies that each main system functionality has in relation to three elements: the physical infrastructure of the system, its socio-economic environment, and the ICT network. Moreover, the attributes, or properties of the system components will be used to formulate resilience indicators against different types of disturbances of the smart distribution grid.
SubjectsRenewable energy sources, Energies renovables
URIhttp://hdl.handle.net/2117/101043