Impact of climate change on wave energy resource: the case of Menorca (Spain) 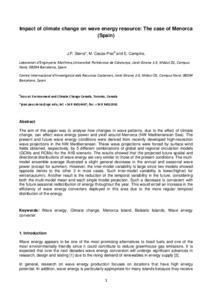 Casas Prat, Mercè
Campins, E
Document typeArticle
Rights accessOpen Access
Abstract
The aim of this paper was to analyse how changes in wave patterns, due to the effect of climate change, can affect wave energy power and yield around Menorca (NW Mediterranean Sea). The present and future wave energy conditions were derived from recently developed high-resolution wave projections in the NW Mediterranean. These wave projections were forced by surface wind fields obtained, respectively, by 5 different combinations of global and regional circulation models (GCMs and RCMs) for the A1B scenario. The results showed that the projected future spatial and directional distributions of wave energy are very similar to those of the present conditions. The multi-model ensemble average illustrated a slight general decrease in the annual and seasonal wave power (except for summer). However, the inter-model variability is large since two models showed opposite trends to the other 3 in most cases. Such inter-model variability is lower(higher) for winter(autumn). Another result is the reduction of the temporal variability in the future, considering both the multi-model mean and each single model projection. Such a decrease is consistent with the future seasonal redistribution of energy throughout the year. This would entail an increase in the efficiency of wave energy converters deployed in this area due to the more regular temporal distribution of the energy.
CitationSierra, J.P., Casas-Prat, M., Campins, E. Impact of climate change on wave energy resource: the case of Menorca (Spain). "Renewable energy", Febrer 2017, vol. 101, p. 275-285.
URIhttp://hdl.handle.net/2117/100993
DOI10.1016/j.renene.2016.08.060
ISSN0960-1481
Publisher versionhttp://www.sciencedirect.com/science/article/pii/S0960148116307704
Collections
Share: