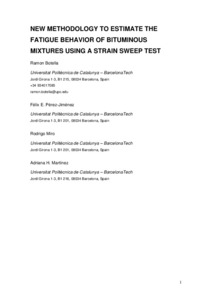 Fatigue cracking of bituminous mixtures is closely related to the loss of ductility produced by the stiffening of the bituminous binder. The main two factors that cause the asphalt binder to lose its ductility are aging and exposure to low temperatures. However, most of the tests designed to evaluate the fatigue behavior of bituminous mixtures are very time consuming, and make unpractical those studies that try to evaluate the influence of many variables. In this research project a strain sweep test was used to analyze the influence of aging, test temperature and bituminous binder type on the fatigue behavior of a continuously graded mixture. As expected, the mixture with SBS polymer modified binder retained more ductility at low temperatures, while the mixture with crumb rubber modified binder had the highest stiffness modulus. All mixtures exhibited the worst fatigue behavior at low temperatures and aging was equivalent to testing an unaged mixture at a lower temperature. The main result of this paper was the implementation of a new methodology to estimate the fatigue law of the material using a strain sweep test, which allowed this fatigue analysis to be carried out in nearly 10 times less testing time than that required by the procedure described in the EN 12697-24 standard.
CitationBotella, R., Perez, F., Miro, R., Martinez, A. New methodology to estimate the fatigue behavior of bituminous mixtures using a strain sweep test. "Construction & building materials", Març 2017, vol. 135, p. 233-240.
URIhttp://hdl.handle.net/2117/100990
DOI10.1016/j.conbuildmat.2016.12.190
ISSN0950-0618
Publisher versionhttp://www.sciencedirect.com/science/article/pii/S0950061816321109