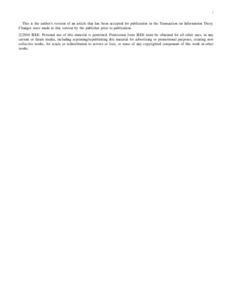 Document typeArticle
Rights accessOpen Access
All rights reserved. This work is protected by the corresponding intellectual and industrial property rights. Without prejudice to any existing legal exemptions, reproduction, distribution, public communication or transformation of this work are prohibited without permission of the copyright holder
Abstract
The degrees of freedom (DoFs) of the K-user multiple-input multiple-output (MIMO) interference channel are studied when perfect, but delayed channel state information is available at the transmitter side (delayed CSIT). Recent works have proposed schemes improving the DoF knowledge of the interference channel, but at the cost of developing transmission involving many channel uses (long delay), thus increasing the complexity at both transmitter and receiver side. This paper proposes three linear precoding strategies, limited to at most three phases, based on the concept of interference alignment, and built upon three main ingredients: delayed CSIT precoding, user scheduling, and redundancy transmission. In this respect, the interference alignment is realized by exploiting delayed CSIT to align the interference at the non-intended receivers along the space-time domain. Moreover, a new framework is proposed where the number of transmitted symbols and duration of the phases is obtained as the solution of a maximization problem, and enabling the introduction of complexity constraints, which allows deriving the achievable DoF as a function of the transmission delay, i.e., the achievable DoF-delay trade-off. Finally, the latter part of this paper settles that the assumption of time-varying channels common along all the literature on delayed CSIT is indeed unnecessary.
Description
©2016 IEEE. Personal use of this material is permitted. Permission from IEEE must be obtained for all other uses, in any current or future media, including reprinting/republishing this material for advertising or promotional purposes, creating new collective works, for resale or redistribution to servers or lists, or reuse of any copyrighted component of this work in other works.
CitationTorrellas, M., Agustin, A., Vidal, J. Achievable DoF-delay trade-offs for the K-user MIMO interference channel with delayed CSIT. "IEEE transactions on information theory", 1 Desembre 2016, vol. 62, núm. 12, p. 7030-7055.
URIhttp://hdl.handle.net/2117/100973
DOI10.1109/TIT.2016.2616348
ISSN0018-9448
Publisher versionhttp://ieeexplore.ieee.org/document/7588140/
Collections
Share: