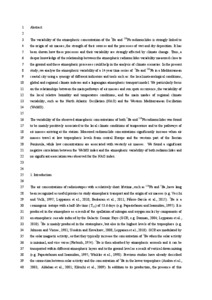 Except where otherwise noted, content on this work is licensed under a Creative Commons license : Attribution-NonCommercial-NoDerivs 3.0 Spain
Abstract
The variability of the atmospheric concentration of the 7Be and 210Pb radionuclides is strongly linked to the origin of air masses, the strength of their sources and the processes of wet and dry deposition. It has been shown how these processes and their variability are strongly affected by climate change. Thus, a deeper knowledge of the relationship between the atmospheric radionuclides variability measured close to the ground and these atmospheric processes could help in the analysis of climate scenarios. In the present study, we analyze the atmospheric variability of a 14-year time series of 7Be and 210Pb in a Mediterranean coastal city using a synergy of different indicators and tools such as: the local meteorological conditions, global and regional climate indexes and a lagrangian atmospheric transport model. We particularly focus on the relationships between the main pathways of air masses and sun spots occurrence, the variability of the local relative humidity and temperature conditions, and the main modes of regional climate variability, such as the North Atlantic Oscillation (NAO) and the Western Mediterranean Oscillation (WeMO). The variability of the observed atmospheric concentrations of both 7Be and 210Pb radionuclides was found to be mainly positively associated to the local climate conditions of temperature and to the pathways of air masses arriving at the station. Measured radionuclide concentrations significantly increase when air masses travel at low tropospheric levels from central Europe and the western part of the Iberian Peninsula, while low concentrations are associated with westerly air masses. We found a significant negative correlation between the WeMO index and the atmospheric variability of both radionuclides and no significant association was observed for the NAO index.
CitationGrossi, Claudia, Ballester, J., Serrano, I., Galmarini, Stefano, Camacho, A., Curcoll, R., Morguí, J.A., Rodó, X., Duch, M. Influence of long-range atmospheric transport pathways and climate teleconnection patterns on the variability of surface Pb-210 and Be-7 concentrations in southwestern Europe. "Journal of environmental radioactivity", 1 Desembre 2016, vol. 165, p. 103-114.
URIhttp://hdl.handle.net/2117/100962
DOI10.1016/j.jenvrad.2016.09.011
ISSN0265-931X
Publisher versionhttp://www.sciencedirect.com/science/article/pii/S0265931X16304209
Collections
Share: