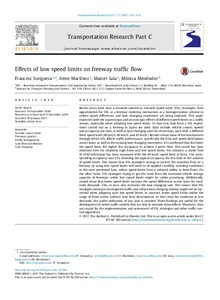 Menéndez, Mónica
Document typeArticle
Rights accessOpen Access
Abstract
Recent years have seen a renewed interest in Variable Speed Limit (VSL) strategies. New opportunities for VSL as a freeway metering mechanism or a homogenization scheme to reduce speed differences and lane changing maneuvers are being explored. This paper examines both the macroscopic and microscopic effects of different speed limits on a traffic stream, especially when adopting low speed limits. To that end, data from a VSL experiment carried out on a freeway in Spain are used. Data include vehicle counts, speeds and occupancy per lane, as well as lane changing rates for three days, each with a different fixed speed limit (80 km/h, 60 km/h, and 40km/h). Results reveal some of the mechanisms through which VSL affects traffic performance, specifically the flow and speed distribution across lanes, as well as the ensuing lane changing maneuvers. It is confirmed that the lower the speed limit, the higher the occupancy to achieve a given flow. This result has been observed even for relatively high flows and low speed limits. For instance, a stable flow of 1942 veh/h/lane has been measured with the 40 km/h speed limit in force. The corresponding occupancy was 33%, doubling the typical occupancy for this flow in the absence of speed limits. This means that VSL strategies aiming to restrict the mainline flow on a freeway by using low speed limits will need to be applied carefully, avoiding conditions as the ones presented here, where speed limits have a reduced ability to limit flows. On the other hand, VSL strategies trying to get the most from the increased vehicle storage capacity of freeways under low speed limits might be rather promising. Additionally, results show that lower speed limits increase the speed differences across lanes for moderate demands. This, in turn, also increases the lane changing rate. This means that VSL strategies aiming to homogenize traffic and reduce lane changing activity might not be successful when adopting such low speed limits. In contrast, lower speed limits widen the range of flows under uniform lane flow distributions, so that, even for moderate to low demands, the under-utilization of any lane is avoided. These findings are useful for the development of better traffic models that are able to emulate these effects. Moreover, they are crucial for the implementation and assessment of VSL strategies and other traffic control algorithms.
CitationSoriguera, F., Martínez, I., Sala, M., Menéndez, M. Effects of low speed limits on freeway traffic flow. "Transportation research. Part C, emerging technologies", Abril 2017, vol. 77, p. 257-274.
URIhttp://hdl.handle.net/2117/100959
DOI10.1016/j.trc.2017.01.024
ISSN0968-090X
Publisher versionhttp://www.sciencedirect.com/science/article/pii/S0968090X17300396
Collections
Share: