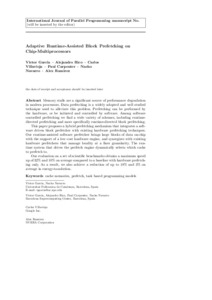 Ramirez, Alex
Document typeArticle
Rights accessOpen Access
Abstract
Memory stalls are a significant source of performance degradation in modern processors. Data prefetching is a widely adopted and well studied technique used to alleviate this problem. Prefetching can be performed by the hardware, or be initiated and controlled by software. Among software controlled prefetching we find a wide variety of schemes, including runtime-directed prefetching and more specifically runtime-directed block prefetching. This paper proposes a hybrid prefetching mechanism that integrates a software driven block prefetcher with existing hardware prefetching techniques. Our runtime-assisted software prefetcher brings large blocks of data on-chip with the support of a low cost hardware engine, and synergizes with existing hardware prefetchers that manage locality at a finer granularity. The runtime system that drives the prefetch engine dynamically selects which cache to prefetch to. Our evaluation on a set of scientific benchmarks obtains a maximum speed up of 32 and 10 % on average compared to a baseline with hardware prefetching only. As a result, we also achieve a reduction of up to 18 and 3 % on average in energy-to-solution.
CitationGarcia, V., Rico, A., Villavieja, C., Carpenter, P., Navarro, N., Ramirez, A. Adaptive runtime-assisted block prefetching on chip-multiprocessors. "International journal of parallel programming", 29 Abril 2016, p. 1-21.
URIhttp://hdl.handle.net/2117/100924
DOI10.1007/s10766-016-0431-8
ISSN0885-7458
Publisher versionhttp://link.springer.com/article/10.1007%2Fs10766-016-0431-8
Collections
Share: