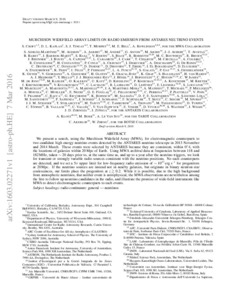 Document typeArticle
PublisherInstitute of Physics (IOP)
Rights accessOpen Access
Abstract
We present a search, using the Murchison Widefield Array (MWA), for electromagnetic (EM) counterparts to two candidate high-energy neutrino events detected by the ANTARES neutrino telescope in 2013 November and 2014 March. These events were selected by ANTARES because they are consistent, within 0°.4, with the locations of galaxies within 20 Mpc of Earth. Using MWA archival data at frequencies between 118 and 182 MHz, taken ~20 days prior to, at the same time as, and up to a year after the neutrino triggers, we look for transient or strongly variable radio sources that are consistent with the neutrino positions. No such counterparts are detected, and we set a 5s upper limit for low-frequency radio emission of ~1037 erg s-1 for progenitors at 20 Mpc. If the neutrino sources are instead not in nearby galaxies, but originate in binary neutron star coalescences, our limits place the progenitors at z 0.2. While it is possible, due to the high background from atmospheric neutrinos, that neither event is astrophysical, the MWA observations are nevertheless among the first to follow up neutrino candidates in the radio, and illustrate the promise of wide-field instruments like MWA for detecting EM counterparts to such events.
CitationCroft, S., Kaplan, D., Tingay, S., Andre, M. Murchison Widefield Array limits on radio emission from ANTARES neutrino events. "The Astrophysical Journal Letters", 22 Març 2016, vol. 820, núm. 2, p. 1-7.
URIhttp://hdl.handle.net/2117/100915
DOI10.3847/2041-8205/820/2/L24
ISSN1538-4357
Publisher versionhttp://iopscience.iop.org/article/10.3847/2041-8205/820/2/L24/meta
Collections
Share: