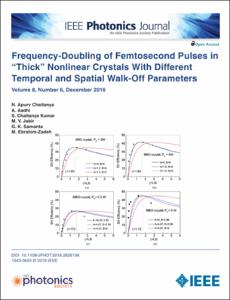 Except where otherwise noted, content on this work is licensed under a Creative Commons license : Attribution-NonCommercial-NoDerivs 3.0 Spain
Abstract
We present a comparative study on frequency-doubling characteristics of femtosecond laser pulses in thick nonlinear crystals with different temporal and spatial walk-off parameters. Using single-pass second harmonic generation (SHG) of 260 fs pulses at 1064 nm from a high-average-power femtosecond Yb-fiber laser in 5-mm-long crystals of β-BaB2O4 (BBO) and BiB3O6 (BIBO), we find that for comparable values of temporal and spatial walk-off parameters in each crystal, the optimum focusing condition for SHG is more strongly influenced by spatial walk-off than temporal walk-off. It is also observed that under such conditions, the Boyd and Kleinman theory commonly used to define the optimum focusing condition for frequency-doubling of cw and long-pulse lasers is also valid for SHG of ultrafast lasers. We also investigate the effect of focusing on the spectral, temporal, and spatial characteristics of the second harmonic (SH) radiation, as well as angular acceptance bandwidth for the SHG process, under different temporal and spatial walk-off conditions in the two crystals
CitationApurv Chaitanya, N. [et al.]. Frequency-Doubling of Femtosecond Pulses in “Thick” Nonlinear Crystals With Different Temporal and Spatial Walk-Off Parameters. "IEEE Photonics Journal", 1 Desembre 2016, vol. 8, núm. 6.
URIhttp://hdl.handle.net/2117/100864
ISSN1943-065
Publisher versionhttp://ieeexplore.ieee.org/stamp/stamp.jsp?arnumber=7738466
Collections
Share: